Acting on the investergation of Colour Schemes and mood I have considered and evaluated the development of the project. I felt that there was a need for more variation in the imagery however, in terms of shapes there is becoming to much on the screen which is becoming quite eratic. Colour of shapes could become another variable in which could be changed but not in relation to the music but the other variable of time.

Creating colour varible which are pre defined through the use of arrays. This means sets of colours or colour systems can be created and implemented through mutiple varriables. These arrays can then can then be obtained by defining the array and the value within in the array. This value that will be value minipulated through the time of day

group1[int(h)] links to the spercific value in the array. Within (h) linking to the variable of values with the array itself. 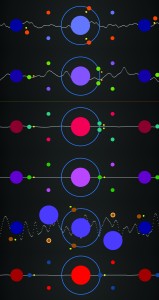 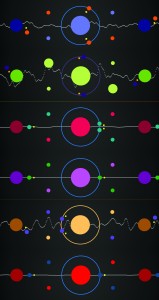 Setting out the colour schemes and applying them to the visual elements has alowed me to introded some more thorioes of emotionl represesntation into the piece. In therms of the concepts of emotional representation as Kurt Goldstein’s assertion that as citd in (Birren 1978) ‘‘It is probably not a false statement if we say that a speciﬁc color stimulation is accompanied by a speciﬁc response pattern of the entire (human) organism.’’ this addition to my design has alowed me to not introduce new theroy but to renforce the use of colour and mood using the ideas and consepts of of colour reated theroms

Some factors of which I could consider for further itterations is key mediating variables in terms of the “interface between colour and human response include an individual’s personality, cultural experiences and affectivestate.”(O’Connor 2011, pp.229-234) the analysis of this could connect to the clurtal signification This in terms of the Music Visulizer may lead me to re consider the meaning of the music that being played and what cluture it comes from not spercificaly the genre.