Today I see a processing sketch, which I wanted to try and replicate with my own code and style. The example was of a poppy that you mousepress to generate a entirely new poppy, on a second press it reduced the opacity of the previous one. This was a cycle of around 5 clicks before the last one disappeared however, the random generation was endless. I liked the ability to get a totally different shape and image each time that built up a range of layers behind as well.

Below is the example, which I got my inspiration from.

I want to try re-create this but making a cheery blossom design like the drawing bellow. I think this would work well as a generative image producing some interesting results. This is also going to help me to explore for loops, if statements and rotation as I will need these to re-create the object each time. The shapes will be made from Bezier curves and ellipse somne of which I haven’t used before. 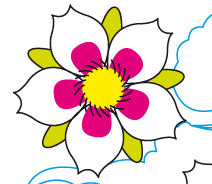 Here is what I managed to produce…..

When I started this mini project I had very limited knowledge of processing and didn’t feel that I would be able to produce a satisfactory result. The final sketch shows how in a short amount of time I have been able to grasp many key aspects of processing and the coding language of java. Compared to the piece I took inspiration from its slightly different in terms of the shape of the leaves and petals does not change on each loop however, many other aspects change like positions, number of leaves and size of shapes. If I went on to improve this further investigating into randomising values on the Bezier curves to make the shapes slightly different on each loop making the imagery slightly more abstract.