Live Testing within the installation area has given me some food for thought in regards to the final design of the installation. After some issues with hardware, design and motion detection a synthesizer version of the ambient detect and representation sketch is presented below. As you can see its relatively simple in design with 2 simple and refined moving features effect by incoming microphone audio.

The visualizer design which was pushed out as a result of changing screen could be used as a way to introduce some more animating parts. Its design was compromised with the change in screen however it had some really cool features of which could be utilized. The emotive time based colour schemes and complex system of music analysis displays change in different audio frequency’s. It would need some reconfiguration with the design but could add more depth to the current layout as there is lots of empty space that could be utilized. 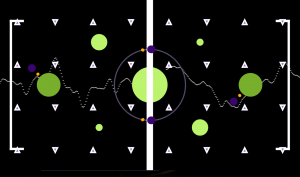 Needs some re design.

Motion Ambience has been left out as the based on its recognition system and hardware ability’s to detect the difference between the motion at varying distances. The camera not being mounted in a high position meant that there was to much interaction in the close proximity however, about 4 meters back very little was being detected creating a representation which was not according to it desired effect/purpose. Some exploration of the kenect could have helped but it was decide that its importance was not a fundamentally part of sketch and could be taken out.

Combining the visualizer and ambient audio can be seen in the video below. Some of the graphics of the ambient audio sketch were not implemented original as it was considered it may not have been needed.

It was good to see all the elements working together but the design still looked messy and like before without a purpose for some of elements left them undefined. Simply re applying the infografic designs added purpose to elements in the design as it gave them a descriptive value.