What inspired this idea in the first place was this work by Marco Tempest, a magician who used projection and pop up books to tell the story of Nicolas Tesler. The uses of small cardboard cut-outs to project imagery onto was very effective inn telling the story as it was playful and craft based keeping a light, non commercial and unrefined feel to it meaning people stayed intrigued to watch. The use of a surface, which was quite changeable and somewhat unpredictable, is something that I found particularly interesting.

This changeable surface and layering of features is something I wanted to explore within a prototype. Also I have not produced a prototype as of yet where I have made more complex content meaning it will give me a chance to work on Cinema 4D, MadMapper and After effects skills while doing so as I will definitely need good content skills when it comes to the graduation project.

My idea for this prototype was to produce some content with a surface or object in mind and then map it onto a layer crafted surface. From my work experience I have been particularly interested in doing projection onto architecture as the scale and challenges really interest me. Living and work in London the architects always seems to impress feeling strong and regal remaining for many hundreds of years seemingly unchanged.

I used this tutorial as part of my development of this prototype as many elements and techniques which could be converted over into my work. It gave me good direction and guidance with how to proceed with this kind of installation projection mapping.

The first step to set this prototype up was to create content within Cinema 4D. From a selected image a scene in 3d environment was produced create as many different surfaces and layers to project onto. By having foreground, mid-ground and backgrounds means different layers can be layered up within the scene.

MadMapper was used to display the content on the projector and cut some of the of the imagery out. 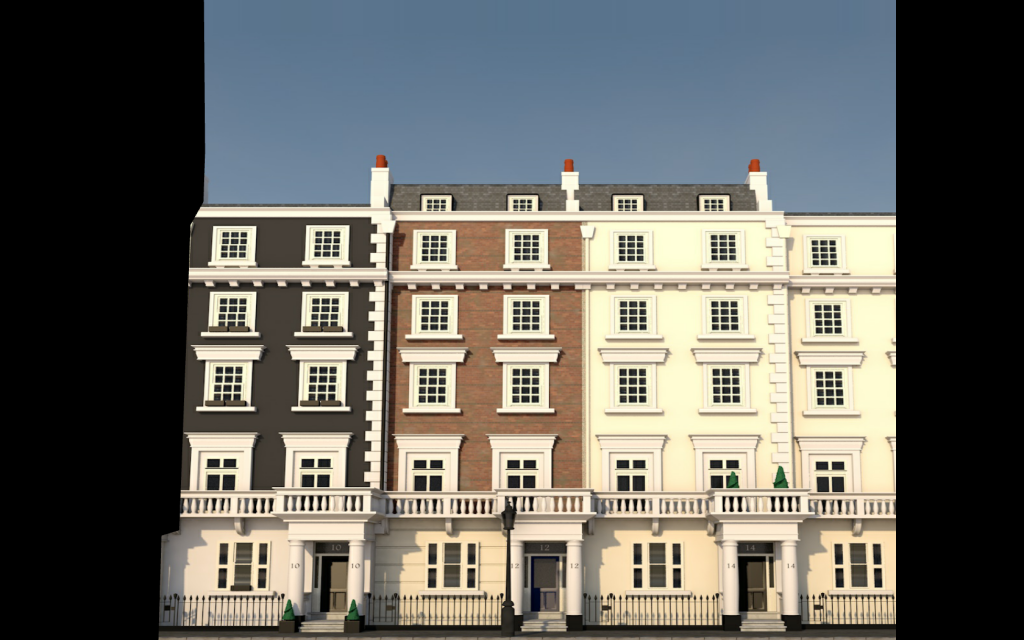 My first attempt at this prototype had some interesting and results and made me reconsider some elements. As you can see from the prototype images below when I placed one of the cut-outs in front of the projected images its was clear to me that the difference in size and the distance from the projector made a big difference. This is something that I initially didn’t consider this as I had been working primarily with content so far that were simple colours and shapes meaning the depth didn’t matter so much when projecting them out.

From this I learnt that this method of producing complex content before the model is not the best method for more complicated content as its difficult to manipulate after the content has been produced. In reflection I feel that it would be far better to have the model, shape or surface in place before creating the content so that it fits the specific shape of better meaning the surfaces and depth of the structure are considered within the creation of content.

With the layering of the surfaces far apart being more difficult than initially expected the plan had to b e slightly changed. I wanted to use the content in a test for seeing if projecting onto surface I could create a realistic look from a 3d surface creation. Turning a flat surface into something more realistic taking another form or changeable is a important aspect of video mapping as this is it alters people’s perceptions of objects.

From the resulting images I was very pleased with what was achieved. By reducing the distance between the layers made the model more similar to how they were to appear in the content. By doing so this allowed the shadows and adjoining lines to connect far better creating a more realistic appearing surface. Therefore the resulting projecting was far more interesting as there were both shadows from the content and real lighting.

From this prototype I have learnt a lot about the process of creating more complex content, now understanding that getting a graphical representation of the surface to project on first is very important to mapping effectively. In future processes its key to get a direct reference in photo or 3d Model from first to make the content more specific to that individual object and its position from the projector.