MadMapper: a simple and easy tool for video-mapping projections and LED mapping. MadMapper easy interface allows artists to map specific video content onto faces of shapes or surface in the real world using a projector. The content can be mapped at different angles with different content and different sizes. The content can be still images, video or python scripted visuals .

Setting up the mapping uss a series of white and black squares that are positioned to define the faces of objects in the real world scaling and sizing them to fit. Then video, images or a script can be applied to them individually or in groups.

With some boxed, a projector and some video from a previous project I tried out this technique to see what the results were like. The boxes were covered in white paper to create an easier surface for the projection making it clearer to see. 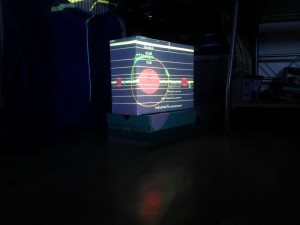 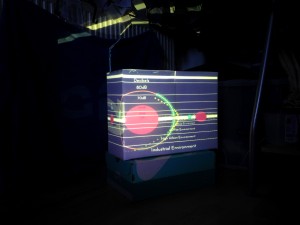 This Is my first attempt at mapping onto an abject using Mad Mapper. Initially I found it difficult to align the face with the box as I was using the mouse to move the faces position. I found that I could use the arrow keys to move each corner in smaller increments making it easier to adjust them. Also by putting a white for the faces colour made it easer to distinguish the corners.

I next found that the video was different size. At this point I didn’t know that the video input could be adjusted in size. As you can see the smaller sides The video in the smaller section is smaller than that of the larger side from looking at the red dots there is a slightly difference. I went on to improve this in the next trial and added another box into the projection 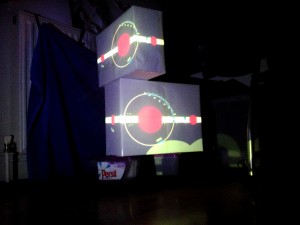 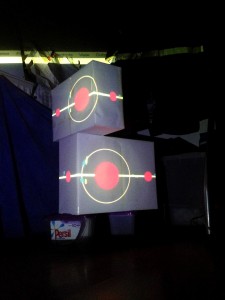 Adding another object to project onto came with some problems and challenges to overcome. Firstly intersecting light paths were the initially problem as the bottom boxes corner was cutting off the light passing to the top box. To fix this problem the top box had to be moved forward more to stop this intersecting and the projector lifted slightly to angle it better.

Going forward I’m going to try and combine several boxes to creates a larger projection in a more complex shape. This could be a series of different videos playing or one larger video. This experimentation is need to see what the results produce and how to move forward with the project.

By Ashley Wilkie in Uncategorized
February 3, 2015