Testing the installation in the foyer brought about slightly different results to what I was expecting. In the previous post I discussed how the design had to be change due to the large screen being out of use which substantially effecting the design. This also had an effect upon the setup of equipment. I had a setup in mind of how the microphone for the audio input and the camera for the motion detect would be situated. As you can see from the diagram below the equipment was place in high areas to get the data from a larger sample. The microphone was placed in a high position to gain better coverage of the whole environment otherwise people closer could start to have greater effect upon this. 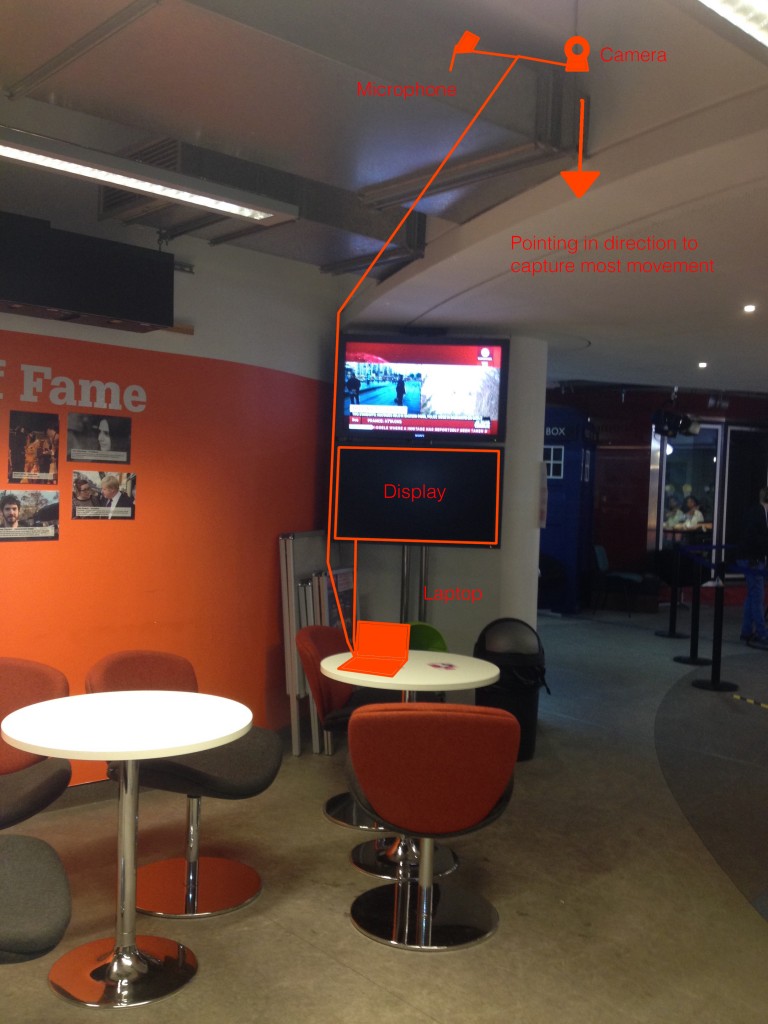 In the area it was more difficult to get a microphone and camera to a high areas as we had limited equipment like ladders and cables to put them in these positions. The compromise to this was facing the microphone and camera towards the main walking area which would capture the most action and best emulate the changing environment. This was not my original plan but the only way I could ensure changing ambience was similar to that of the enviroment.

The videos below show the first simple visualizer working on the screen. At the time I was working on implementing the idea of Motion ambience within the sketch. The first tests gave a good insight into how the colours and size of elements changed on a large display meaning I could go away and adjust these. In terms of ambience it occurred to me that the environment was a lot noisier than expected also, the ambient music that Costa coffee was playing started to interfere. Lastly it was suggested that some idea of measurement could be implemented as current labels of each sound level to give the graphics slightly more of a descriptive element. These problems are solved in the next tests situation.

Implementing the Motion Ambience was relatively simple adding another dimension of interactivity to the installation. My thought was that the louder the environment got the greater the amount of movement would be. Testing proved an important aspect at this point as some unforeseen issues with motion detect aspect of Open CV.

As you can see from the video below, the motion detect was controlling the white bar that increased in size the more movement it detected. The video shows that the sound was increasing however the motion wasn’t as there was lots of people in the foyer theoretically it should have been of similar levels. From moving around in front of the sketch It occurred that the people closer to the camera were having greater effect upon the motion and the movement. This meant there was very little movement in contrast to the audio. This was something un expected and needs to be looked at in the next development.

In summary from testing in the environment I have found