Design of an environment can directly affect further design in the immediate area. This is done to keep in with the design of the environment and maintain a constant and concurrent design. On the other hand design can some times contradict or differentiate itself from an environments that its in. This can be commonly seen in architecture and the surrounding neighbour hood that the buildings are built in.

Bauhaus design movement is one of the most influential movements of the 20th century on architecture. The founder of the Bauhaus movement Walter Gropius born in Germany had a major influence on the architecture in Germany itself.

“The influence of the 19th century English designer William Morris, who had argued that art should meet the needs of society and that there should be no distinction between form and function” (Funk 1954)

This ethos was taken forward into the design of products and buildings especially in berlin and the surrounding area. The movement influenced design of buildings in Germany like the Dessau building, The Mensa and Federal School of the German Trade Unions that were all built with Bauhaus influences. The movement also went of to affect the graphical design world as well.

Paul Klee was particularly influential with his use of repetition and colour diffencation. One of his ethos was on colour surrounded the effect of saturation can change the feeling it implies which, is similar to some colour theory I explored previously. This could have come from Bauhaus ethos itself, that there is arrange of feeling that may apply to a colour however the saturation is the distinction between them. This can be seen in some of his work where you can see the saturation of the colour red implies different feelings such as.

Wassily Kandinsky was a Russian painter who joined the Bauhaus school in 1922. His book “Point and Line to Plane” He proposed was that a dab of colour on a canvas will assume different meanings, depending on it’s position on the plane — a radical idea for it’s time. As you can see Kandinsky work was radically different to design movements of previous like arts & crafts and nouveau who mainly were inspired by nature, Kandinsky was inspired by form and structure. In his work he uses mainly 2d geometry to build an construct larger more elaborate structural forms. In this image it could be considered he it’s trying to create a lighthouse from the use of a small level of ground, tall structure the angled vertical lines. An outward directing triangle signifying something in the distance of the view of the image or the image could be a total form of abstraction and not have a literal meaning just a combination of geometry. This is possible because similarly at the time the Art Deco started to have an influence of the work of designers possibly influencing the work of Kandinsky as well.

At the same time as Bauhaus was arising, as a design movement so was the use of gestalt theory. Gestalt is a psychology term, which means “unified whole”. It refers to theories of visual perception developed by German psychologists in the 1920s. Rudolf Arnheimde describes the theory is simple terms principles

Similarity – The similarity between different elements can be shape, colour, size, texture or value. The more commonality that individual elements have, the greater the sense of coherence, thanks to similarity. This can be seen in the work of Kandinsky where he consistently uses a equal circles, triangles and squares with few inconsistencies.

Proximity – uses the close arrangement of elements to create a group association between those objects. If individual elements are also similar, they will tend to be perceived as a single whole, even though they are separate elements.

Symmetry and order – Put simply, this principle says that a composition should not provide a sense of disorder or imbalance, as otherwise the viewer will waste time trying to locate the missing element, or fix the problem, rather than focusing on the message or instruction. This like similarity is seen in Kandinsky where he uses disorder to construct something of a larger form.

Gustult has been thought to have gone on to inspire design movements like Minimalism, Industrialism and Pop Art where its main elements and principles are the foundation of these movements success and inspiration.

The media foyer has been designed with a mixture of design movements in mind. From looking at the colours, furniture and building works a Industrial Bauhaus Modernist design could have been used in the design of the area.

This could be due to firstly there is a selective amount of vibrant colours all ranging form an orange/red colour spectrum also, the use of exposed chrome in a signification of Bauhaus connection. However, the unfinished and exposed sections of ceilings come from and industrial design trait. The images of the walls are all placed in a way that could be considered to use gestalt principles as there proximity to each other is distinct and similarity of orientations and rectangular shape is consistent. 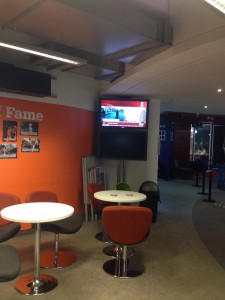 For the design of the graphics installation it would more relevant to keep any imagery on the screens of a modernist style with the use of symmetry, limited colour pallet and geometric shapes if I wanted to keep in with the style of the environment its being installed in.

On the other hand if a statement or visual impact was going to made possible the use of photographic imagery to catch the eye of audiences, bright colours which contrast with existing colours and more natural forms and shapes. This would allow the work to make a greater visual impact as it would contrast the current implemented design styles.

Arnheim, R., 1966. Toward a psychology of art. Berkeley: University of California Press.