In todays lecture we discussed some examples of Media Experience Designs. These are exceptional and unique examples of how information itself can influence the presentation of the design and its context its received in. They also show how interaction with small medias collate into a larger media form

Her design for the Vietnam War was unconventional and emotionally challenging. Her design was not radically different to many other war memorials, it displays the names of fallen soldiers but how the information is presented is emotively powerful.

The names are not put into a uniform alphabetical where by it makes the fallen soldiers participation seem less significant, where as she formed the names in chronological order. This gave the families of the fallen soldiers more of a connection two who there love one may have knew and an approximation of the time they died. This allowed family’s to connect with others who were felling the same emotion and grief uniting these people.

The memorial from an information design point of view showed the influx and fall in the death rate. It gave a chronological wave like structure of death toll consequently showing when the largest battles happened and the effect they had upon the war efforts.

Rough trade is a brand of music shops that are selling more than cds and vinyl records these days, more a musical experience for music lovers. With the introduction of mp3 players and digital records the industry’s high street shops for selling older forms of music has majorly decreased, as there is less of a market for them. Rough trade are an exception to this and consequently are increasing there brand size by using the high street space not only as a place to buy records but somewhere that music lovers can interact alike.

There brand of shops in brick lane and portabella have becomes a tourist attraction for many music enthusiasts people in and around the area. Its back to basics culture is expressed by their retail director who says

“Ignoring technology is to ignore what has become a way of life for our customers,” Rough Trade Retail director Stephen Godfroy

In their shops they allow people to commemorate their experience with a media artefact of which, you take an image in a photo booth, then stick the image to a wall with hundreds of others. This allows people to feel like they have become apart of the shop itself and have a sense of belonging to this community making it there own. For the shop it produces a great display of customers and an iconic attraction to there stores allowing customers to interact with it 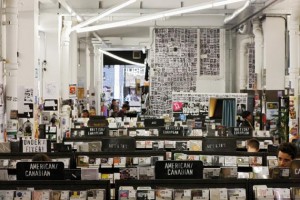 Posing as a tourist in Manhattan Nobutaka Aozaki went around a busy shopping area asking people to draw directions to a place near by. From this he was able to create a much larger map of the geographical area using the strangers drawing. The drawing ability and different types of paper used for the images makes the map very rustic and charming.

This media concept combines media that strangers produce, made up of there personal views and memory of the area which create a more cultural and society built map. As a media form the project shows a diverse range and unconnected set of people can un knowingly produce a collective substantial and complex media artefact. 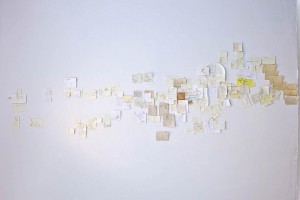 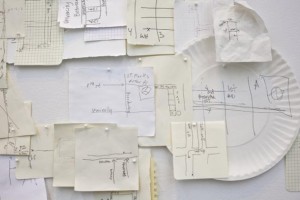 Other examples of this could be