Working on an immersive installation the content and context of the piece needs to be impacting and powerful enough to capture and hold audiences attention. From personal literature exploration and artistic inspiration I have been looking at the early 15th century painting  The Garden of Earthly Delights by Hieronymus Bosch. The painting is particularly inspirational to me as I love the imaginative but contextual meaning of the piece, including its surreal nature of expression. Seeing the piece as a young artist it captured my imagination which has carried through still intriguing me in many ways. Within the project there has been much discussion of content and what kind of imagery would capture and audience’s attention with projection from the movable projectors. 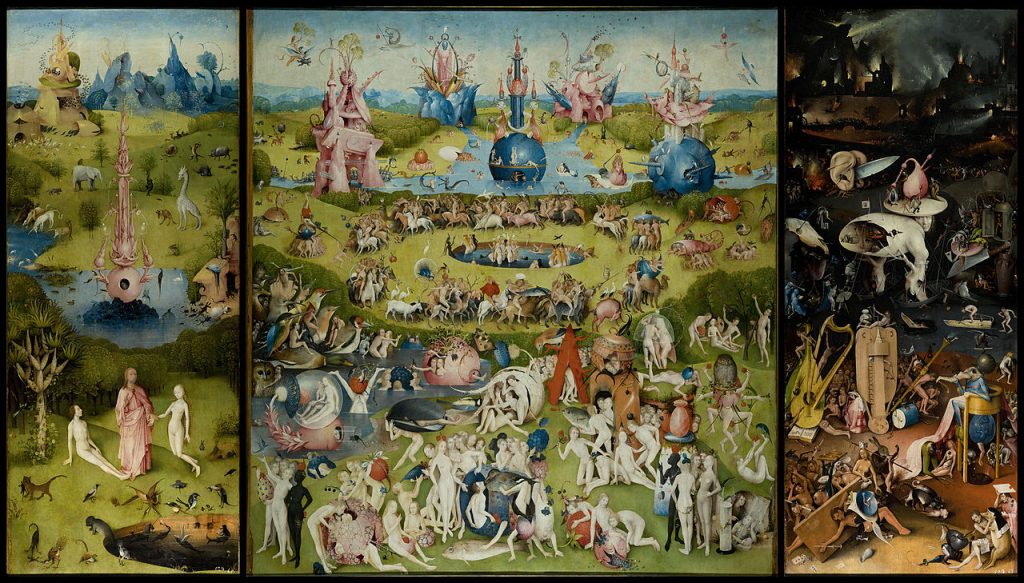 Within the project there has been much discussion of content and what kind of imagery would capture and audience’s attention. The project was designed to use projection from a movable projector in immersing audiences within an embodied interaction. The nature imagery which was being used in a previous post wasn’t particularly striking and didn’t grab the attention of an audience. Additionally, the reason for moving the devices around didn’t feel necessary and connected to the experience as a whole with this content in mind.

Using my research inspiration I thinking creating a more surreal experience could be far more interesting in attracting audience to play with the projection. Taking inspiration from Bosche’s work and Bendito Machine another animated surreal style piece, I plan to take the project in a more imaginative and surreal direction from its route of nature. One possible idea could be the eyes as seen in Bendito Machine, eyes add a deep emotion representation of a person and become very surreal as seen in many of Salvador Dalis video works.

Something, which has been discussed in my research, is psychoanalysis. Psychoanalysis discusses the unconscious from the perspective of Freud, Jung and Lacan. Both pieces of work highlighted above have elements related to psychoanalysis including characters within their works which are representative of Jung’s archetypes. A possible direction for the project could be representing some of these archetypes within each of the projections or devices. Each device could be representative of a person or set of person’s character or characteristics.

A quick initial test was made using this eye idea to find out if its was in anyway surreal, immersive or attractive to an audience.