Moving on from my initial 10 ideas I have been synthesizing the best and most promising ideas. Using some quick 3D I managed to create some mockups of what the installation would/could look like. One of the key outcomes from analysing these ideas was the interactive and tactile pieces had the most potential and ability to provided an audience with a element to create their own perceptions based upon the piece. This links to my original outset concept for the project where I stated “the project needs to change audience perceptions through the use of projection mapping.” the interaction is taking this a step further in not only providing a singular perception but one to be explored by the audience. 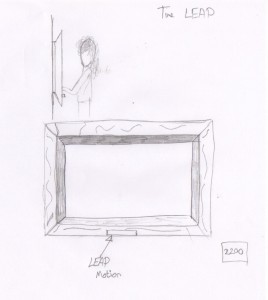 Using a Leap Motion and projection its planned to take a picture frame and animate a landscape image that can be controlled using the leap. The landscape will be passing into a dystopia by introducing destructive and urban elements into the imagery to foretell a future of over consumption will result in a lost of the natural landscape. The use of the leap is giving the audience the ability to control and distinguish the future. 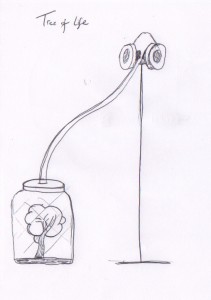 The idea is to put tree or project a tree into or on a jar that is connected to a gas/ventilation mask. The concept behind this is that through the fast development of technology and consumption grows moving into the future humans would have cut down and destroyed all trees on the planet that purify carbon dioxide into oxygen meaning there is none for human to survive. The mask is connected to the jar as a mode of interaction to trigger the projections on the background which will show abstract desolate urban landscapes.