Information display & advertising relies on eye catching and attention grabbing visual images and powerful text statements. Political campaign advertising are great examples of these as seen in a recent large political campaign for Scottish independence. These features make the advert deliver a more powerful message to the audience.

We were tasked to come up with a poster design for Independent Dorset a hypothetical independence campaign to make Dorset independent from the UK. The poster had to be eye catching and to displayed to an audience of students & lecturers in the media schools foyer. The idea behind this project is to understand audiences, gain a better understanding of displaying information and learn to ask the public for opinions of the work. 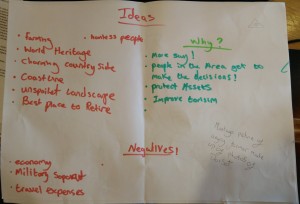 Initially for the poster we thought about features and assets which sets Dorset apart from the rest of the UK like its huge farming industry, beautiful landscape and wide range of heritage sites. We thought this would be the best way to make the poster recognisable as Dorset as well as highlight Dorset’s great assets. Our initial idea was to express Dorset’s Green untouched landscapes and farming industry in our poster with montage of images.

Here is some of out initial idea drawings. 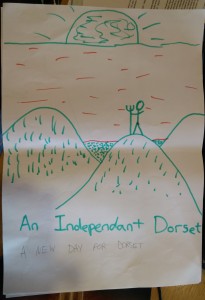 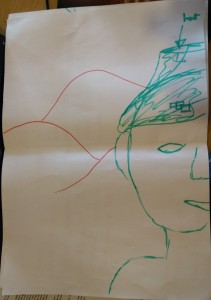 The two main points to the sketches were rolling hill in the background showcasing the scenery and the farmer on his land. We felt that the farmer showed strength and power to protect what is his however, him alone also showed that he was very independent and didn’t need support from others.

From this in the next week we are going to develop the images using digital images to gain greater idea if the layout and ideas work as we want.