A week after our first brainstorming/mind mapping session about Independent Dorset we have produced some digital mock up of potential layouts and ideas.

From our initial concept of a farmer in a serene Dorset landscape we have added some new ideas of some montage and patriotic images. We felt from our brainstorm that these were good places to move forward with and the ones that people living in Dorset could connect and associate with.

Our first mock up was a montage image. The design was to be use a number of small images of Dorset’s scenery, heritage sites and landmarks to build a larger image of a farming landscape. The underlying idea was that the backbone of Dorset is its working people, production and farming industry’s. As a trial we tried using images of flowers in place of the Dorset images to gain an understanding of what it could potentially look like.

This image we got was unsatisfactory and as a group we felt that it didn’t because there was way to much miss mash going on in the image causing the central figure to be taken away from. The image became far to cluttered and had no focal point. From this the decision was made that a main and more pronounced focal point was needed in the second mock up.

The second mock up we took inspiration from a very successful form of information delivery “propaganda”. Its success at persuading and informing people quickly made it perfect for a political campaign poster.

The farmers’ expression was important to the message in the imagery. A pose which was happy but smug was our desired expression as it showed he was strong and powerful but satisfied that he now had more power over his own fate. This gave the audience the exact message that Dorset being independent meant more power for the working class and therefore a better quality of life.

The background has sweeping hills with the Dorset giant on. This was done to give it a greater connection to Dorset itself and showcase the beautiful landscape, which needs to be preserved. Having the farmer holding the flying flag of Dorset shows audiences Strength and independence. 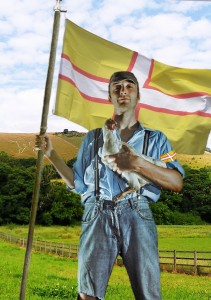 To improve this mock up further I think that some text which giving an empowering short strappy message to help viewer to connect the images and further convince and potential persuade them that Dorset should go independent. In regards to the text design were going to look at the design movement Bauhaus because they are renown for there font design style and individuality. This would work well linking the images to our theme of propaganda because Bauhaus was a rising design movement when propaganda was at its peak and most.