We have decided to put content in circles as well to keep with our Orbit Theme. So far the circles are very un organized and un ordered which makes the site look very confusing and messy. To combat this we are going to overlay them so they follow around the page. However this could be problematic when it comes to smaller devices so a different system will have to be found for them.  We are using a shadow on the elements to distinguish them from each other. This comes in the form of a  “box-shadow: 0px 0px 50px #000; ” this gives us a shadow onto elements behind and provides a bit of depth to the page.

Another problem we have found with the site when adding content is the central orb. When it opens it covers some of the content which can be problematic and cause confusion. It looks ok because of the colour difference but we may have to find another solution like when it opens the content moves out the way. This would be a possibility but would require the CSS to change when the open nav tag is added. 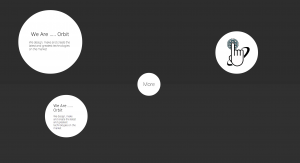 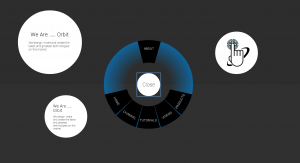 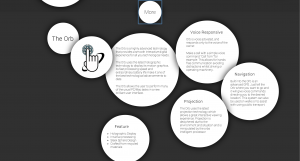