When producing advertising media for public display, the designer needs to consider whom the main type/group of people/audience they are trying influence or grab the attention of. Audiences can be attracted to different types of media depending of their gender, age, origin, religion and likes or dislikes.

Placement of advertising is also key to the success of an advert. If no one walks past it doesn’t matter how good the advert is no one will ever see it. Looking at patterns of movement around a space or through an area is vital to the success advertising and is something that always should be considered when placing advertisement.

One of the most successful advertising types is propaganda. Propaganda is the deliberate, systematic attempt to shape perceptions, manipulate cognitions, and direct behaviour to achieve a response that furthers the desired intent of the propagandist”(Jowett and O’Donnell, 1986). This is because of it direct approach to influencing the audience. A downfall of propaganda is that it is quite specific to a certain audience and usually targets one individual group.

Propaganda worked well in the war period when British, American and German armies were trying to gather men over 18 to fight or help on the front line because they had a specific audience they wanted to influence. In the context of the time period audiences were very patriotic and believed fully in helping there country to become the best this gave the campaign a direct approach to influence their audience. 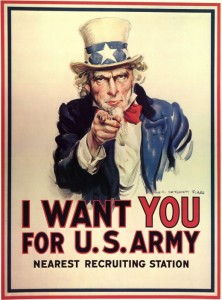 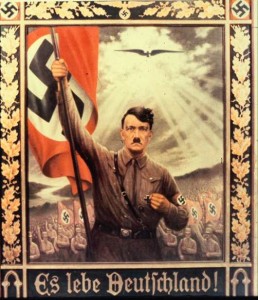 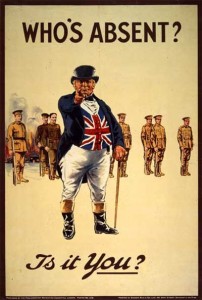 These are some of the advertising campaigns that some country’s used to rally their troops, as you can see they use patriotic symbols to try and encourage there target audience to get recruited. The use of motivational images and direct bold text impacts the viewer to grab the attention of passing audiences.

Looking at patterents of peoples in busy area helps designers to understand better where best to place advertising or artrork. For example here is some research I done on peoples patterents of movement through a gatering area/ foyay in Bournemouth universities media school. I was looking at how many people passed through between 10:55 & 11:05 that is the 10 miniutes between lecture change overs. 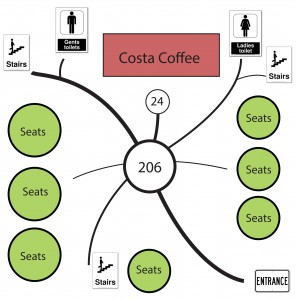 As you can see from the diagram there were clear directions where students and lectures were moving towards (as seen by the line thickness). It was interesting to see that quite a lot of people stopped for coffee in this time, as it was so close to a key change over period that I expected far less.

In this area I feel that the to the best pace to put a poster/advertising in this area would be on the right hand side entrance to the stairs and gents toilets and left of costa here would get the most viewing and passers by. Also in this place it would get people standing in the coffee queue having a longer amount of time to look at it.